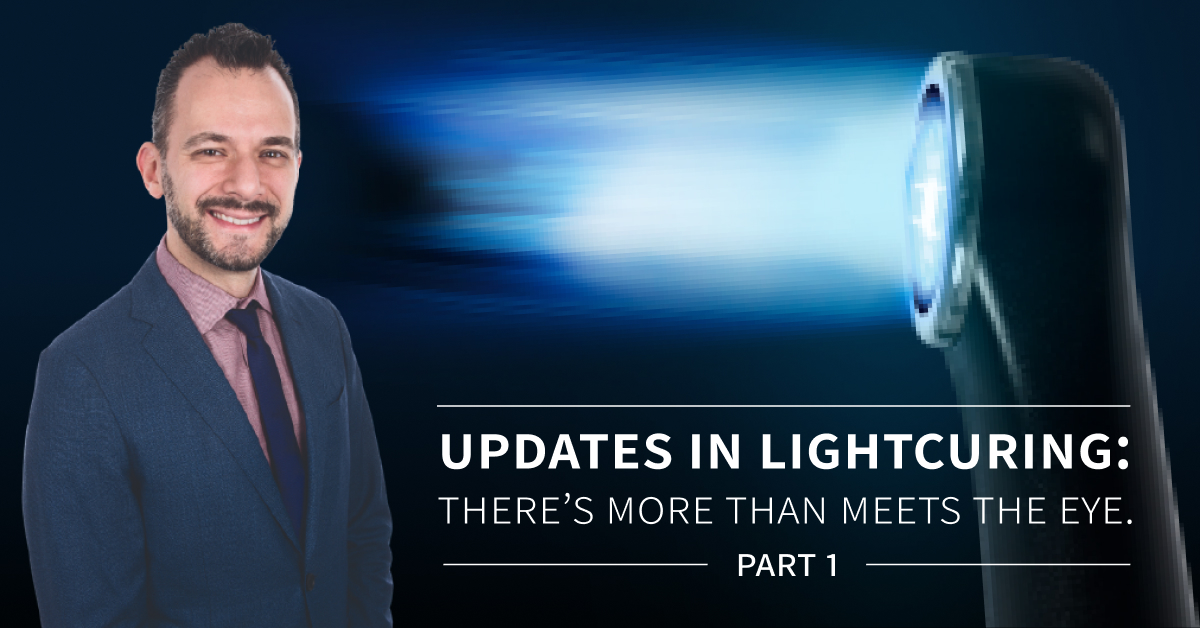 In our profession it is always important to remember that the main goal is tooth preservation. With so many techniques and materials available, it is not hard to think that sometimes our restorative work can replace natural dentition, when in reality, it acts merely as a substitute. It should always be remembered that, to this date, Dentistry and Material Engineering have not yet created a material better than the tooth.

With that concept in mind, direct composites are important not only due to their esthetic characteristics, but also because it is one of the least invasive techniques in Dentistry. Usually it is possible to perform great restorations with lighcurable resins with maximum preservation of the natural dentition.

However, those restorations must also last as much as it is possible. In this context, a properly light cured composite is one of the pillars of longevity.

This is a topic that must be understood if we want our restorations to be more durable and predictable1, both esthetically and functionally. It is already known that obtaining a high degree of polymerization of resin composites is one of the biggest concerns during photopolymerization, since this is one of the requirements for a long-lasting restoration.2

That being said, topics such as power, energy density, light collimation, which photoinitiators are being used in the composite, location and type of restoration, and beam homogeneity are a few examples of what is necessary for a better-polymerized composite.

Obtaining a high degree of conversion is an important concern during photopolymerization since one of the conditions for the long-term success of composite resins is that they must be sufficiently cured. Insufficient curing is related to failures such as microleakage, discoloration, increased abrasion, and also pulp sensitivity.

Because of that, should be part of the clinician’s concerns to take into account important composite characteristics, such as what kind of photoinitiators the material contains3 and also the composite’s opacity and color. Those factors must be regarded since light transmission and absorption vary among different lightcurable composite resins. As a general rule, it is possible to state that the more opaque, and the more colorful the composite, the more light it requires4.

Regarding lightcuring lamps, one important element that should be taken into account is power, and is expressed in W. When dealing with a specific area, then the term power density arises. Also called exitance or light intensity, power density is usually expressed in mW/cm2.

Before moving on, it is important for the clinician to be aware of the diameter of the tip of the device being used for lightcuring. The reason is that year after year, some manufacturers of some dental lamps used a trick in order to increase the numbers: instead of increasing the nominal power, they made the tip smaller, or in other words, they increased the apparent irradiance by making a smaller tip. What happens is that many smaller dental lamps may require several applications in order to cover a restoration, while others, with a bigger footprint may require one, sometimes two (Figures 1 and 2).

Figure 1: Smaller tip diameters requires several applications in order to proper polymerize larger cavities. Also, knowing the beam homogeneity is fundamental to understand how the composite is being cured. 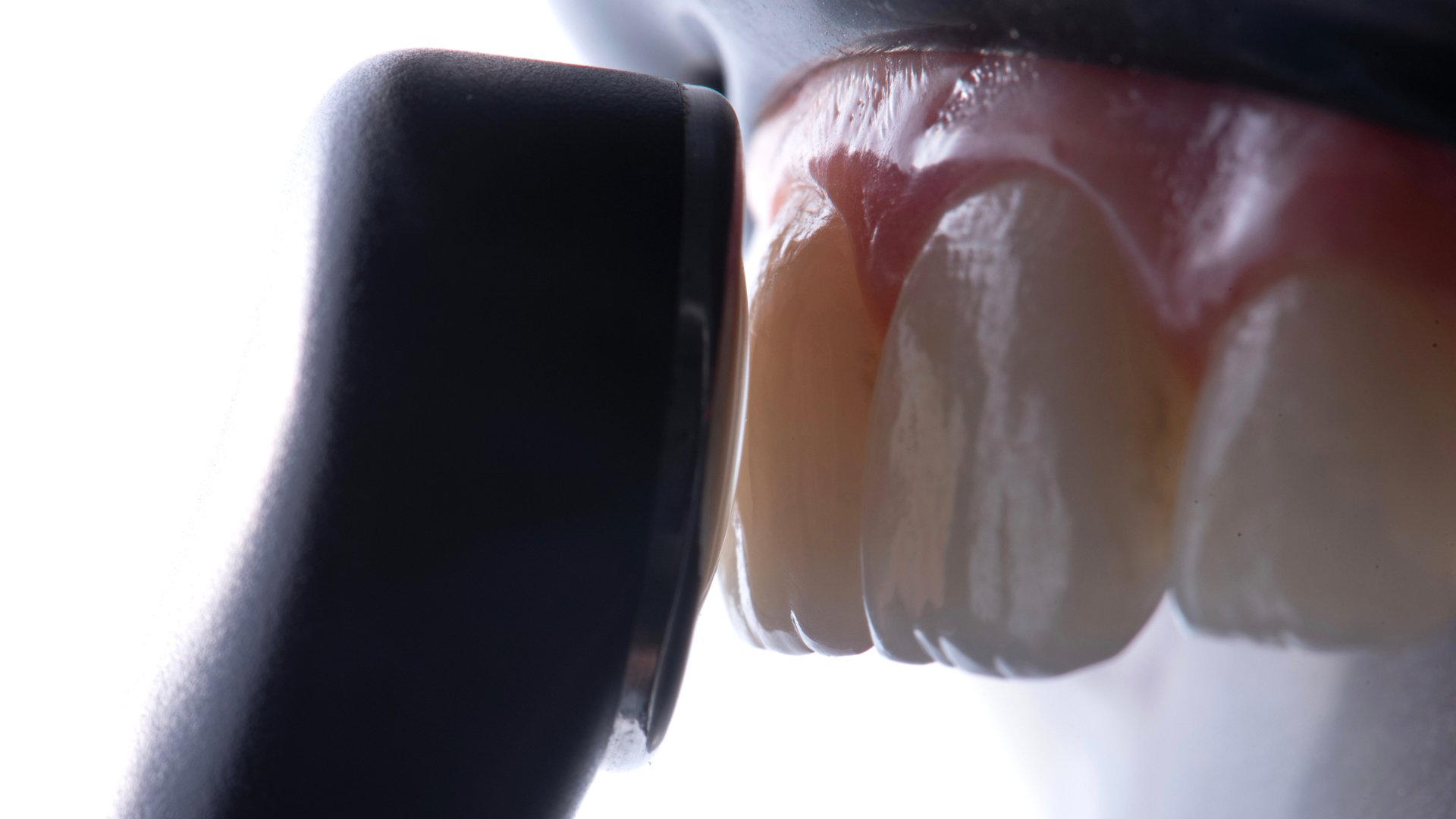 Figure 2 (a, b). Figure 2a presents a Valo Grand curing light. When compared to a regular lamp, on figure 2b, it is possible to note that its larger diameter is able to encompass the whole buccal area of a central incisor

Scientific literature disagrees on the amount of energy necessary for a proper curing of composite resins. Some studies7 declare that the minimum required dose to provide good mechanical properties of a cured composite should be at least 24 J/cm2́. However, that is not an absolute value and varies from composite to composite8, depending mainly on type, color, translucency, and which photoinitiators are present. Nowadays, it is accepted that a value of 16 J/cm2 is the required dose necessary to fully polymerize an increment of 2 mm of composite9, 10, even though this value could be lower in some cases.

Light being produced versus light being delivered

As previously seem it is mandatory to understand how much light is being produced. Besides that, it is also fundamental to understand how light is being delivered into the cavity. The way in which light spreads as it leaves the tip is know as collimation, and this should be taken into consideration when curing any material in cavities such as Class I and Class II, for example11.

It is paramount to ensure that even the deeper layers of composite are properly cured, as the power density delivered at the tip can be very different from the amount of energy that is actually delivered to deeper cavities. Knowing how much difference exists between the two energy values is especially critical when the distance from light tip to restoration increases, as the deepest portion of a regular Class II restorations can be 8 mm deep, or more.

That being said, besides being powerful and capable of emitting a broader wavelength of light, the lightcuring device should ideally also effectively deliver the majority of the produced light all the way through the restoration. Unfortunately, not all light produced reaches the target as the distance from the tip increases due to light dispersion, and that may vary a lot due to the type and construct of the device. However, almost all information shared by manufacturers about their equipment’s power output refers to the light emitted at the very tip.

An article12 evaluated the loss of power in three dental lightcuring lamps from the light-emitting tip to the region being cured, at three different distances.

It goes without saying that, with the increasing distance, all three devices presented loss of irradiance. However, one of them (VALOTM, Ultradent Products Inc.) showed a better collimation.

Figure 3 illustrates the beam collimation of each lightcuring device in a disperse aqueous medium. The image helps to visualize the concept of collimation and the illumination area of each device at different distances.

Even though all three lamps produce a very similar amount of power in a given area (around 1700mW/cm2), with the increasing distance the beams became less concentrated. The main reason why light is more focused in the case of the VALO light is because of the tip design. That is also the explanation why the other lamps are not able to focus light as in the previous case. Having a lens at the tip helps makes so that light does not spread (Figure 4).

Figure 4 (a, b): VALO’s lens, isolated and assembled, respectively.

The other tips were a classic fiberglass tip and a plastic lens (Figures 5 and 6). The plastic lens did the opposite of collimating light: it spread light, exactly what should be avoided, especially when there’s distance between the device and the bottom of the cavity.

To understand this situation under another prism, and how it relates to everyday practice, with the information gathered from the study it is possible to calculate the total amount of time necessary to reach the value of 16 J/cm2. At 0 mm, the necessary times were all very similar to all lamps, raging from 9.58 to 8.7 seconds, a difference of only 0,88 seconds.