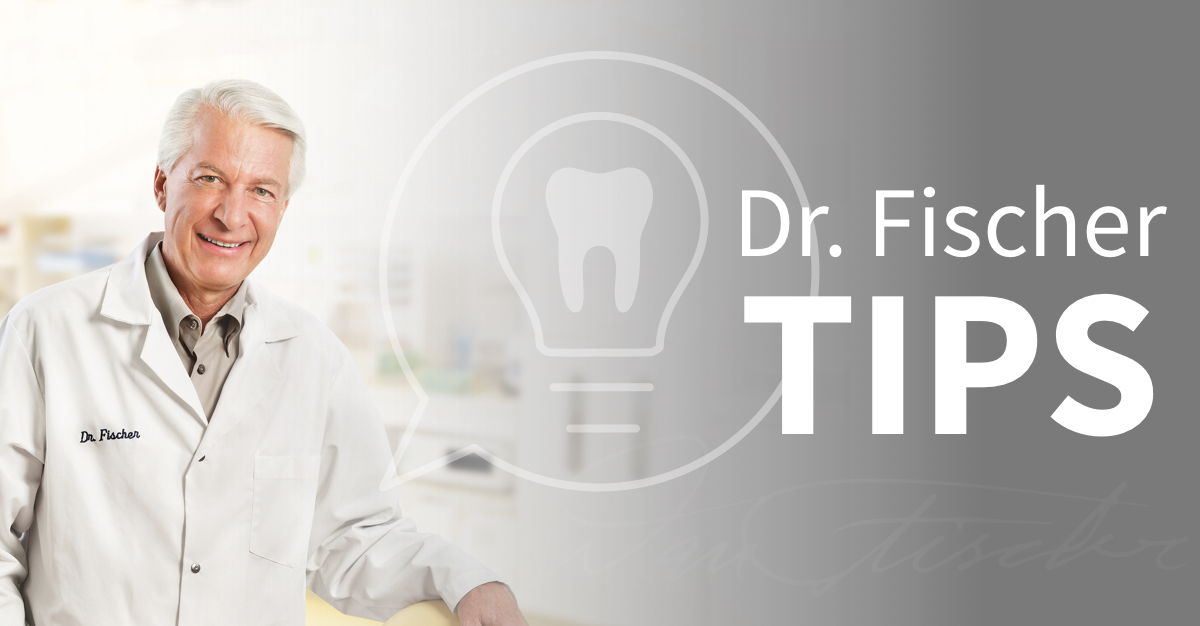 It is not as easy as it seems! Why light curing deserves an appropriate degree of attention

A study1 in the U.S. has shown, and it should not be much different in Europe, that we generate approx. 50% of our income with treatments using light polymerization (direct or indirect restorations). That‘s why this topic deserves an appropriate degree of attention: Which lights do I use? How are they handled?

Originally, the composites era started with chemical curing products. Yet, after just a few years, the process of light curing was recognized as the better way. Since then, a lot has happened. UV light was replaced by blue light and LED chips now produce the light directly. However, the question is still whether we dedicate the appropriate degree of attention to the process of light curing.

It seems to be easy to cure a composite filling. It even seems to be so simple that many colleagues do not care much about it. Usually they leave this procedure to their assistants. But the dangerous aspect is that it is impossible to directly see whether the light curing process was successful. After all, the surface of the composite will always be hard, but what it looks like underneath has a significant impact on the long-term success of a restoration.

Two aspects have to be respected in order to achieve satisfactory curing results:

Curing results are dependent on a proper combination of both features.

1.  The proper handling of the curing light

Before you start, check to see if the light is in good condition and is working properly. Make sure the lens is clear of any debris. Always use a barrier sleeve when working on a patient.

Regular testing of the light output with a commercially available light meter (e.g., an LED radiometer, Efos, or devices from the specific light manufacturer) may be useful. However, these devices may be quite inaccurate and they are hardly able to simulate the clinical situation in a meaningful way. The measured values therefore will reveal little about the true light intensity. However, such devices are useful to determine the constancy: receiving around the same value in a measurement weekly will show that the light output of the device has not changed.

In order to use the full light output for polymerization, the positioning of the light lens is of great importance. Significant energy losses will occur if the distance between the composite and the surface is too large or if the illumination is done at an angle to the surface (instead of parallel).

Also, wobbling during the polymerization process could have serious effects on the amount of energy applied, especially as the illumination with strong lights nowadays is
shorter than in the past. Usually this is fine, but the loss of a few seconds of light due to off-targeted illumination will be particularly serious. Hence, stabilize the light laterally with your finger and watch it carefully during the polymerization pro- cess. Most users turn their eyes away; which is understandable, because unprotected eyes should not be directed at the bright blue light. In order to be able to keep an eye on the surgical area, I recommend the use of light protective goggles or light shields, ideally for dentist, patient, and assistant.

How much time should the curing process finally take? This depends on the light performance and the requirements of the composite. If you would like to achieve, for example, 15 joules of energy using a 1.000 mW light, this calculates as follows:

The applied energy is a product of time and the light’s mW power. In this case, however, I would illuminate for 20 seconds in order to create a safety zone, so you‘re on the safe side.

A powerful light, even if it is equipped with LEDs, produces a certain amount of heat. Studies have shown that consequent- ly, the red gingiva especially can be jeopardised. Therefore, the illumination of the red gingiva should be avoided or kept as short as possible. Several short curing intervals are recommended rather than one long one. Just a few seconds of curing with brief breaks between the curing cycles can prevent heat damage to the gingiva.

2.  The right choice of the curing light

The first point to think about in this context is the light intensity, which is emitted by a curing light. When developing our VALOTM curing light family, including the VALOTM Grand light, we made sure that they provided a superior, high-intensity light to cure any dental material. 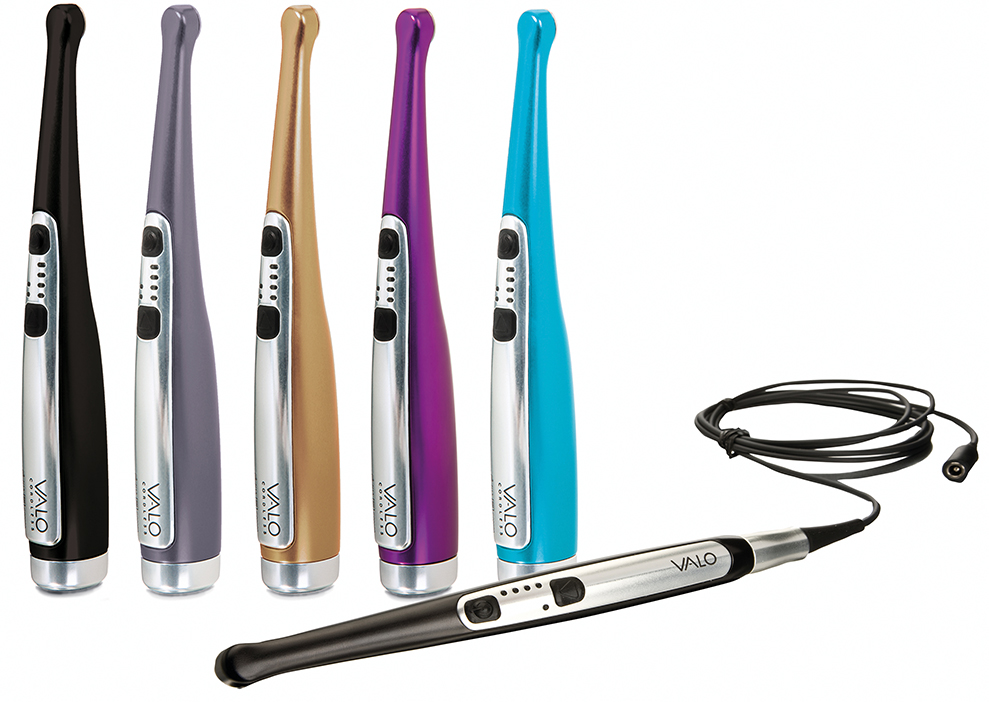 Left: You have the choice: the VALO and VALO Cordless lights. The latter is available in five attractive colours.

Right: The new VALO Grand curing light combines all benefits of the revolutionary, award-winning VALO light, but with a 50% bigger lens. Valo Grand is available as cordless and corded version.

However, not all curing lights produce a broadband light that includes lower wavelengths to optimally cure composites which contain other initiators than camphorquinone. The heads of the VALO and VALO Grand lights are equipped with four LED chips in three wavelengths and offer a range of 385–515 nm, which will polymerize all light-cured dental materials. 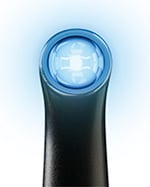 The heads of the VALO and VALO Grand lights are equipped with four LED chips in three wavelengths and offer a range of 385–515 nm. The special lens provides a homogenous, collimated light beam.

As mentioned previously, the positioning of the light head is important for the energy to reach its target. The space between teeth and mouth is usually tighter than you would like; and a light guide, angled at 45°, can hardly be positioned parallel on the occlusal surface of a molar. The VALO and VALO Grand lights do without a light guide. The light is emitted directly by the low profile light head at an angle of 85°. This way, only a minimal opening of the mouth is required—I am especially happy about this when treating children and elderly patients.

Left: Patients have to open their mouth extremely wide when a 45° angled light guide is used, as it is the only way it can be positioned parallel on the occlusal surface of a molar.

Right: The VALO and VALO Grand light do not use a light guide. The light is emitted directly by the low profile head at an angle of 85°. This way, only a minimal opening of the mouth is required.

The emitted light should be collimated and homogeneous: collimated in order to lose little power when curing from a distance of several millimeters, and homogeneous as the entire composite surface should get the same quality of light. The special lenses of the VALO and VALO Grand lights fully meet these requirements. 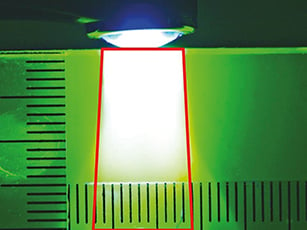 The spread of the VALO and VALO Grand light beam is mini- mal, so very little energy is lost when curing from a distance.

Additionally, a curing light should be practical. Plastic bodies can break easily in ever- yday practice. It is extremely disturbing if a device fails. Seams and fan openings
impede the cleaning and disinfection processes. That is why the VALO and VALO Grand lights consist of a unibody construction of solid aluminium, which is anodized with a scratch-resistant coating. The metal also acts as a heat sink, so that a cooling fan is not needed. 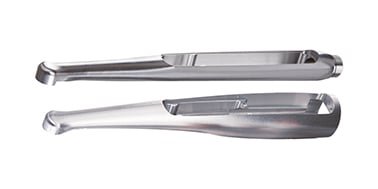 The unibody construction of the VALO and VALO Grand lights are made of solid aluminium. This guarantees durability and acts as a heat sink.

In terms of curing lights with batteries, it is frequently a question of insufficient charging. When the VALO Cordless light was developed, we solved this problem by using small rechargeable lithium ion batteries. Two sets of batteries are included, so one set can always be charged in a separate charger. They can be changed quickly if needed, however that is barely necessary more often than once a week.

From an economical and practical point of view, for me it is also important to have the choice between a number of lenses for the VALO and VALO Grand lights. For example, I often use the PointCureTM Lens, which allows tacking luted restorations to allow for the removal of any excess cement prior to full polymerization. It is also possible to put this lens on the head of a light-conducting fiber glass post in order to stabilize it initially before starting with the core build-up.

The versatility of VALO and VALO Grand curing lights is enhanced by a number of lenses. For example, the PointCure Lens allows tacking luted indirect restorations to allow for the removal of any excess cement prior to full polymerization.

A symposium in Halifax, directed by Prof. Richard Price, gathered important aspects of light curing in May 2014. The detai- led consensus paper is available online at www.jcda.ca/article/e61.

It is generally recognized, especially when processing bulk fill composites, that the technique will be more or less suc- cessful depending on the performance of the light polymerization. Whenever a thick layer of composite is cured at once, a high-power, reliable curing light is essential. In this context, dentists commonly doubt their curing lights. This was shown by a survey of the Clinicians Report in the U.S.: 34% of the surveyed dentists use the bulk-fill technique, but only 14% dare to polymerize up to a depth of 4 mm (Source: Clinicians Report, Dec. 2014). I don’t recommend curing any layer more than 4 mm deep.